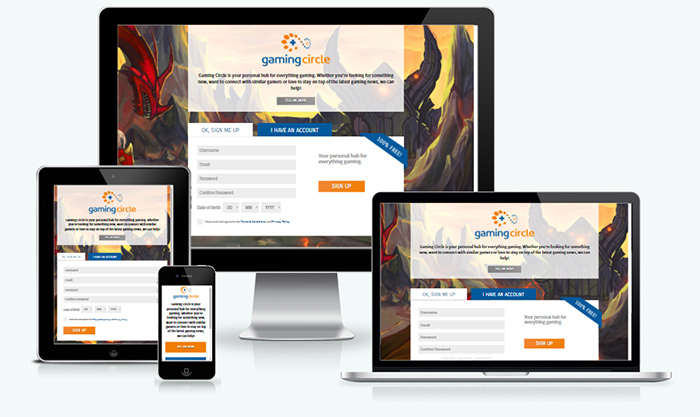 Gaming Circle is, without a doubt, the most complicated website build we have ever worked on. It took two years to design and develop due to the complexity of the project.

The site was a place where gamers could search for a particular game on a gaming platform (Xbox, PlayStation, etc) and find other games who played that game so that they could “team up” and play online together. Each gamer put in the usual times that they played on their consoles. Timezone calculations were performed so that gamers could find people who played at the same physical time as them, no matter where they were in the world.

A database of thousands of games was added to ensure a wide range of multi-player console games was available.

Gamers had the ability to select their favourite games, set up accounts, add the games that they play to their account, connect with others, find new games to play based on their interests and more.

Sadly the website is no longer live. To this day, Gaming Circle remains the project that were are most proud of.

“I have been working with Sarah for over two years, during which time she has helped me design, build and market my website.

When I initially approached Sarah, I knew immediately that she was the perfect partner for an ambitious project. She was, and has continued to be, extremely professional, very accommodating, and has consistently gone above and beyond not only what we agreed contractually, but also what I expected of a talented web developer. Coupled with this, Sarah has an extremely keen eye for detail and the patience of a Saint – both of which I find are often absent in many of the other developers in the field.

Sarah has been involved in my project from the very beginning, and has been an integral part of achieving a long-held dream of mine. She has been invaluable in designing the website – her expertise in terms of what users expect of a website, as well as what looks and works best from a UI point-of-view, has really shone. Beyond this, nothing has been too much trouble for Sarah. Not only has she consistently brought to life my ideas, but has been more than happy to incorporate new ideas and functionality as the website evolved – both on mobile and desktop. Sarah’s responsiveness to emails and changes is second-to-none, which sets her apart from the majority of developers who often overlook the importance of timescales and deadlines.

Finally, while not initially agreed contractually, Sarah has been heavily involved in the initial pre- and post-launch marketing (via MailChimp) of my website. Before I started working with Sarah, I hadn’t a clue where to start – but she was more than happy to recommend existing tools, develop novel tools to allow me to continue marketing autonomously, and reminded me of certain legal considerations throughout the entire process.

In closing: Sarah is the perfect developer. Without her, my dream would have never reached fruition. On top of it all, I feel like I have gained not only an invaluable business partner, but also a friend. I can’t recommend Sarah strongly enough, and only wish there were more like her in the industry!”